According to the American Diabetes Association, blood sugar levels rise as we age and typically increase by 1 to 2 mg/dl per decade after age 30. Rising blood sugar levels can affect the quality of life and decrease life expectancy. However, there is research that suggests that eating a healthy breakfast at the right time could help in the prevention of blood sugar problems and diabetes.

A study in Japan followed almost 5,000 middle aged adults for over a decade and found that those who skipped breakfast were twice as likely to develop Type 2 diabetes. Two recent 2015 studies found that the American lifestyle of eating a light breakfast such as toast and coffee with a large dinner at night was detrimental to controlling blood sugar. It was discovered that eating more calories at breakfast, when the glucose response to food is lowest and consuming fewer calories at dinner, when the glucose peaks after meals, resulted in more stable blood sugar levels throughout the day. In other words, it is better to eat a larger meal in the morning when your body is better able to process those calories.

A highly controlled study at Brigham and Women’s Hospital Division of Sleep explored the timing of meals and its effects on the glucose levels. Initially participants ate breakfast at 8:00 a.m. and the last meal at 8:00 p.m. and slept normally through the night.  Their blood sugar levels were normal.  Then they flipped the timing of the meals.  Subjects had breakfast at 8:00 p.m., dinner at 8:00 a.m., and slept during the day. The glucose levels were 17 percent higher in the evening. The finding suggests that the circadian system (physical, mental, and behavioral changes that follow a 24 hour cycle and respond to light and darkness) strongly affects glucose tolerance and that the timing of both meals and sleep were of significance.

I was formally one of the toast and coffee Americans.  Despite what studies say or find, I have discovered the benefits of eating a good breakfast.  Properly fueling my body in the morning provides more energy for my workouts, and I am better prepared to tackle the day.  In addition, I have found I am less likely to binge on other unhealthy foods throughout the day. I begin every morning with an omelette, oatmeal, and strawberries.  Try this simple omelette recipe.  Easy to make and fresh ingredients. 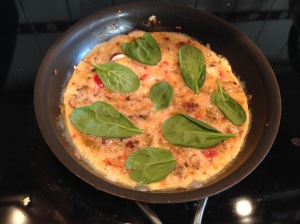 Spray a small skillet with olive oil spray and turn to medium heat. In a bowl whisk together whole egg and egg whites. Pour into the skillet and heat for 2 minutes. Top with garlic powder, jalapeño, and pico or tomatoes.  Add spinach leaves. Continue cooking until egg sets and begins to brown. Fold omelette in half and serve.

Brighamandwomens.org Press Release You Are When You Eat: Link Between Blood Sugar and Internal Clock Explored. April 13, 2015

Eating healthy does not have to mean bland, flavorless food.  Rather, you can use fresh, simple ingredients and seasonings to prepare delicious recipes.  Today I had one of my favorite dishes, shrimp burritos. The meal takes less than 10 minutes to make and can be prepared in advance to save time. Give the recipe a try and let me know what you think. 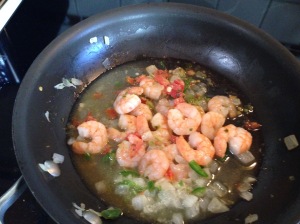 Ezekiel Flourless Tortilla (can also be found at Trader Joes)

Spray the bottom of a small skillet with Trader Joes olive oil spray. Add chopped onion, jalapeño pepper, and garlic powder over medium heat. Add the thawed shrimp and Pico de Gallo.  Reduce heat, cover, and sauté for 3 minutes. While shrimp is simmering, roll an Ezekiel tortilla in a damp paper towel and heat in the microwave for 30 to 45 seconds. Serve shrimp mixture on top of the tortilla and garnish with chopped cilantro and guacamole.   I usually also have a side salad with a sprinkle of balsamic vinegar to complete the meal.